Enal Drugs are pre-eminent Paroxetine Hydrochloride Manufacturer. It is an antidepressant of the Selective Serotonin Reuptake Inhibitor (SSRI) class. Enal Drugs started its operation in the year 1996.we enjoy a considerable reputation and export to different countries like Europe, Asia, and Africa.It is available as a generic drug. It can also be used for the treatment of depressive disorder, obsessive-compulsive disorder, panic disorder, social anxiety disorder, generalized anxiety disorder and much more. Paroxetine is also available as an oral tablet, oral capsule, and oral suspension.It has also been used in the treatment of hot flashes and night sweats.

some of the brand names which is available for Paroxetine Hydrochloride are Paxil, Paxil CR, Pexeva, Brisdelle, Anti ulcerativeSeroxat and Rexetin.

Paroxetine Hydrochloride is used in many medical forms.Some of them are 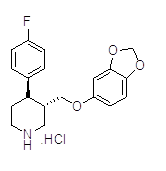 Enal Drugs is an ISO 9001: 2008 certified company started its operation in 1996.we are involved in developing and manufacturing of anti-ulcerative drugs, their intermediates and also other APIs and intermediates. we export our products to Europe, Asia, and Africa & South American countries. we have high technical qualifications and professional experience with leadership qualities team.Customer satisfaction is our main goal.